Rodney Smith, a prominent photographer whose whimsical work invited comparisons to that of the Belgian surrealist René Magritte’s, died on Dec. 5 at his home in Snedens Landing, N.Y. He was 68.

The people in Mr. Smith’s photographs carry umbrellas and wear hats, often bowlers. Some peer into binoculars as if they can see into the future. Others lean into space at odd angles, Buster Keaton-like, or are poised to leap from a building ledge or airplane wing. A few have their faces obscured by hats, boxes and lampshades.

In one of his best-known photographs, an elegantly dressed couple kiss atop a taxicab on an Upper Manhattan street jammed with three lanes of cabs, which Mr. Smith had hired. In another, a golfer in knickers surveys a shot from the branch of a live oak as a cloud seems close to enveloping him. In a third, an acrobat walks a tightrope between tall hedges while holding an umbrella in one hand.

“I perceive my pictures as playing with time and space,” Mr. Smith wrote on his blog, “The End Stops Here,” “but mostly I see my pictures as funny and, to use the most vulgar expression from the 21st-century art world, beautiful and romantic.”

He said that he never previewed his shots by taking Polaroids, and that he gave little advance thought to the images he created. He rarely used artificial light and refused to ask his subjects to smile.

Rodney Lewis Smith was born on Dec. 24, 1947, in Manhattan. His father, Sanford, was a clothing manufacturer, one of four partners in Anne Klein & Company. His mother, Marion, was a homemaker.

Mr. Smith graduated from the University of Virginia and held a master of divinity degree in theology from Yale University. He found his artistic inspiration during a visit to the Museum of Modern Art’s permanent collection of photography while in college in 1968. Photography, he said, became an emotional release from the control of his father, who died in 1972.

“I never felt I was good enough for him,” he said in September in a discussion of his work at the B & H photo and video store in Manhattan. “I started to become a photographer because I wanted to get as far away from the world that I was familiar with.” 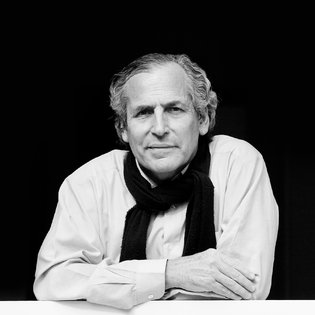 He did — but only for a while. At first he focused on the landscapes and people of Israel, during a three-month fellowship in 1976; it led to his first book, “In the Land of Light.” Years later, he remained disappointed that a group of Arab women had been reluctant to let him photograph them grinding flour. Seeking his niche, he also traveled around the United States and other parts of the world photographing farmers.

In the mid-1980s he began to get corporate work, including an assignment from Northrop, the defense contractor. The company traditionally advertised its latest military aircraft, but it would not let Mr. Smith shoot its newest product, the stealth bomber. Instead, he photographed some of its executives — starting on a path of producing many portraits of chief executives.

“I had assumed I wanted to get as far away from my father as possible,” he told the audience members at B & H. “But I was very comfortable with these men. I knew them. I understood them. They were kind of familiar to me.”

He said he grasped that they exerted power out of fear. In one instance, an impatient chief executive wanted a session with Mr. Smith to end as quickly as possible.

“I ask him quickly to stand in one place, to look directly at me, and I take one frame and put my camera down and announce to him that he is finished and can now go,” Mr. Smith wrote on his blog. Asked by the executive if he was serious, Mr. Smith recalled telling him that he had “a competent picture equal to the effort” that the man had “put into the experience.” Without more time, he said, one shot was enough.

The connection between him and his father, the clothing executive, grew stronger still when Mr. Smith began to immerse himself in the fashion world, working for Neiman Marcus, Mirabella, Saks Fifth Avenue, Marshall Field’s and W magazine.

His fashion photography and work for various publications, including The New York Times Magazine, demonstrated an emerging penchant for wit and surrealism.

In the catalog to a 2003 show of Mr. Smith’s photography at the University of Virginia, Jonathan Stuhlman, an art writer and curator, wrote, “In Smith’s enchanted world, balance produces beauty, laughter and whimsy dance hand in hand, and things are not always what they seem.” The photographs, he wrote, offer “a perfect blend of reverie and reality.”

Besides Ms. Smolan, his second wife, Mr. Smith is survived by a daughter, Savannah, and a son, Jonah, from his first marriage, which ended in divorce; a sister, Marianne Harrison; and two grandsons.

Mr. Smith could be candid on his blog about his work and his life. Interviewing himself on it in 2014, he wrote: “I put my life on the line for photography and it returned the effort with abundance. Its gift back to me was a me devoid of most of my neuroses. One who is clear, sharp and energetic.”

Yet in another post he wrote that beneath the joy and fancifulness of his photographs “is a loneliness, a slow whiff of sadness and an everlasting melancholy.”

All images are © Rodney Smith, All Rights Reserved

A version of this article appears in print on December 17, 2016, on Page D8 of the New York edition with the headline: Rodney Smith, 68, Photographer of Surrealistic Whimsy.